Recently, Iris from The Daily Dietribe contacted me asking me if I’d like to make a grain-free version of a recipe she was working on for a reader. It also happened to be a vegan recipe. A vegan baked recipe. Grain-free and vegan and baked? That’s a challenge. But, I was willing to give it a go.

The majority of this recipe is really Iris’. To make it grain-free, I reduced the liquid a little, swapped out the grain-based flour, and amped up the vanilla. Mostly, I added extra vanilla because there’s a tipping point for me with psyllium husks. It seems to be at about 2 T. Anything beyond that and I can taste them, and I’m not a huge fan of the taste. But, I tried to sub in some flax seeds. Nope, it doesn’t work as a cake. A gooey pudding, yes. (And, honestly, the kiddo devoured that version.) But, it wasn’t a cake.

Truth be told, this final version still isn’t quite what I want. It will fall a little bit as it cools. But, once fully cool, it has a firm, tight cake crumb. (It really is better the second day. This photo was taken the first day and it was still a bit moist.)

If grains do not bother you, be sure to check out Iris’ version. 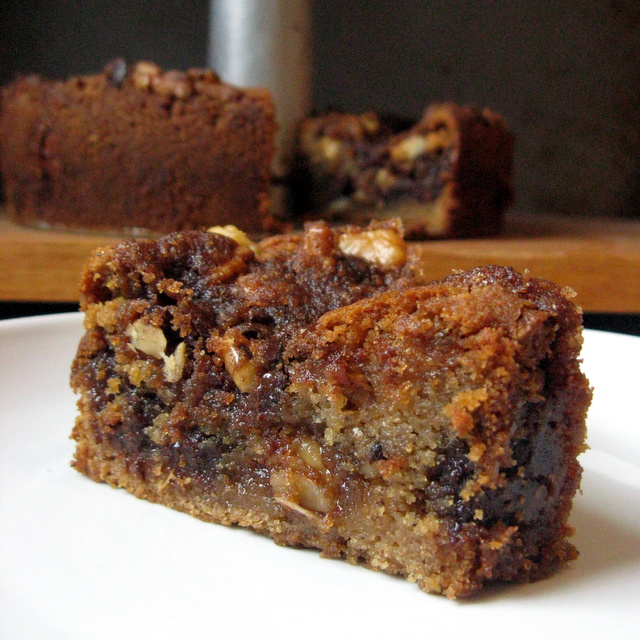 1. Prepare filling in a small bowl and set aside. Preheat oven to 350 degrees F and grease/flour a tube pan.

3. Stir together flours/starches, sugar, baking soda and baking powder in a medium sized bowl. Pour into wet mixture and process until well mixed.

4. Add in coconut oil and process until completely mixed.

5. Pat half of batter into tube pan (it will be sticky), followed by half of topping. Repeat. Bake for 50 minutes. Allow to cool completely before taking out of pan. (Really. Seriously. You have to wait. Make it the night before if you want it for breakfast the next day.)

This entry was posted in Uncategorized. Bookmark the permalink.