It’s time, once again, for the Secret Recipe Club! This month my secret blog assignment was Cindy from Everyday Insanity. Cindy had a dream of an Easy Bake Oven as a little girl, and hey – so did I! (Okay, hands up if you DIDN’T want an Easy Bake Oven. No takers? Yah, I thought so.) Anyway, Cindy has been cooking and baking up a storm ever since, and she has lots of recipes on her blog to show for it.

Now, typically, in the Secret Recipe Club, I’ve taken a recipe and modified it – usually a lot – to fit my food needs and preferences. This month, I was shooting for a gentler form of modification – slight tweaks instead of whole recipe overhauls.

That cut out a lot of Cindy’s recipes. As delicious as Perfect Peanut Butter Cookies or Chocolate Zucchini Bread might be, we’re talking major overhaul for the GFDF crowd. There were some recipes, though, that I could have made without tweaking at all – like this Mango Salsa or this Pineapple Salsa. Both of those recipes are entirely raw and filled with wonderful fruits and veggies. Sadly, I’m not currently eating tortilla chips. And, salsa without chips might have just been a bit too torturous.

So, I settled on a happy medium recipe – Crunchy Granola. The kiddo has been asking for some anyway. A few minor tweaks and I had a delicious gluten-free vegan breakfast option for the kiddo.

She’s right about that making a double batch thing. Do it. You’ll thank me later. 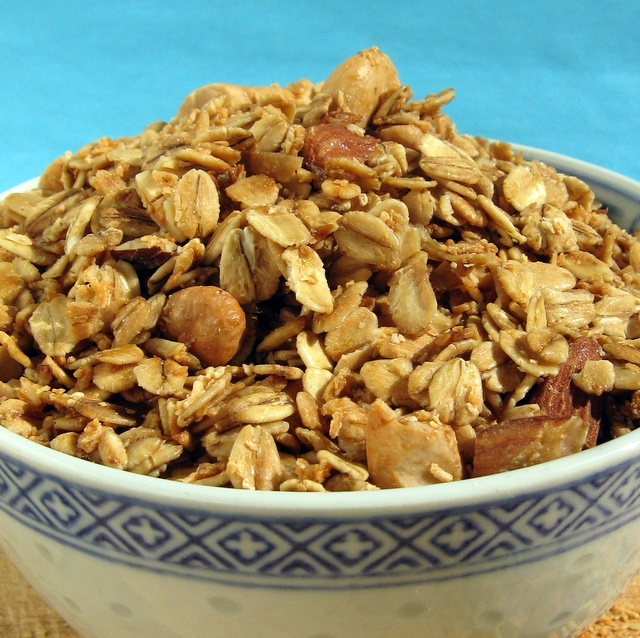 Preheat oven to 250°. In a large bowl whisk the maple syrup, oil & salt together. Add the rest of the ingredients and stir well to coat. Spread on 2 baking sheets. Bake for 1 hour, stirring occasionally. Turn off the oven and let sit until the golden brown and crispy. (Mine sat for probably another half hour.)

See what everyone else has done for this month’s Secret Recipe Club!